Eureka  »  Blogas  »  Difficult adaptation in a kindergarten? Even fairy tales can help a child

Difficult adaptation in a kindergarten? Even fairy tales can help a child 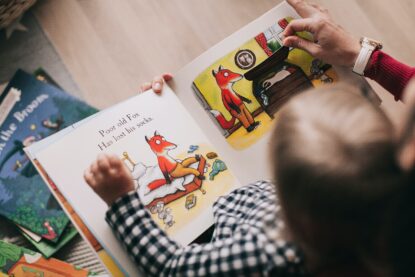 It is not a secret that fairy tales are a fun evening ritual and an opportunity for a child to empathize with the world of fantasies. While reading fairy tales we also develop language, stimulate child’s curiosity and creativity. Agnė Gurkšnė, a psychologist at the „Eureka“ early education school, which is located in Vilnius and Kaunas, also presents another benefit of fairy tales that not many of us have heard about.

“Reading books and telling stories can also be used when there are major changes in a child’s life, such as the birth of a new family member or adaptation in an educational institution. This is a great therapeutic tool for a child who is experiencing a lot of anxiety and changes, who are facing challenges”, – A. Gurkšnė points out.

According to A. Gurkšnė, creating stories or reading fairy tales can help a child to accept new changes more easily. “If parents notice that, for example, going to school or kindergarten is extremely difficult for a child, it is recommended that the child would be read a tale about a child’s beloved hero who is facing difficulties and overcoming them successfully. You should choose a fairy tale that is not directly related to the problem”, – A. Gurkšnė emphasizes. The psychologist adds that there should be no words in the tale such words as school, teacher. And if the parents notice that the child does not want to talk about their difficulties, he should not be pressured and hurried.

Analyzing the insights of scientists, A. Gurkšnė observes that a lot ot scientists see the benefits of fairy tales. According to the famous Polish scientist M. J. Kuciapinski, listening to different stories, a child faces various challenges on a subconscious level and can later apply solutions to these problems in real life. According to J. G. Robinson, a child who often listens to fairy tales finds it easier to live and tolerate the state of anxiety in real life and finds effective solutions to problems. By listening to fairy tales, the child learns life values, acquires optimism and hope.

A. Gurkšnė notices that according to E. Erikson’s theory of personality development, the most effective time for fairy tale therapy is from 4 years. The so-called „I“ of a four years old child is not yet fully formed, so it may still be difficult for the toddler to explain and understand his emotions. „However, it is definitely worth trying fairy tale therapy even after the third birthday,“ adds psychologist A. Gurkšnė.

First of all, it is meant to calm down, to take a break from the life routine, the reality. Psychologist A. Gurkšnė believes that with such a goal, it is best to choose fairy tales that children like the most. It is useful when it’s an evening ritual that helps build a closer relationship with mom or dad and calm down after the day’s events.

The second purpose of fairy tale therapy is to learn new values, rules and other things. „If the goal is to teach a child something, the book must be chosen according to the child’s age and what we want to teach. For example, if our goal is to teach a toddler to sit willingly on a potty, we can read a book to the child several times a week before we start practicing this skill, in which the main character is accustomed to the potty, faces difficulties and overcomes them successfully. It could be the T. Ross book “The Little Princess. I want my potty! ”, – advises A. Gurkšnė.

The third purpose of fairy tale therapy is – changes. This goal is strongly related to the previously mentioned – educational. Psychologist A. Gurkšnė recommends reading and analyzing fairy tales until a new skill emerges. Motivating a child can help achieve the goal. Encouragement for a child can be much more beneficial if we compare him to his beloved character.

“The child can be told that the hero of the book also faced setbacks. The hero also needed time before he learned, for example, to ride a scooter. Analyzing such a story, the child will realize that he will eventually succeed as well. It is important to support the child, to comfort him when needed, to encourage and to ask him or her not to give up”, – the psychologist of the „Eureka“ early education school shares her thoughts.